The main reason for this article is I hope to help those who might go through this nightmare.

Last week was not a good week for my MacBook Pro. The beginning of the week it was acting flakey and slow. Wednesday, when I shut it down and restarted, it would not boot. The little wheel kept spinning and spinning. Even after more than a half of an hour. I had to use the Recover partition in OSX Lion to get it to boot at all. I decided the best call to action was to reload Lion and did a download. 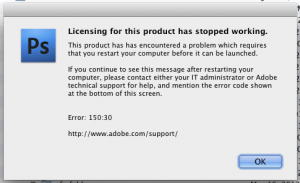 Not a good dialog box.

The mac then did boot and I was able to get to the Finder.  It seemed everything was back to normal.  It was able to read email and us the internet.  Then I tried to boot Adobe Photoshop CS4.  NaDa.  I dialog box came up.  “Licensing for this product has stopped working.  If you continue to see this message after restarting you computer, please contact either your IT administrator or Adobe technical support for help, and mention the error code shown at the bottom of your screen.  Error: 150:30”

Now I have a fully licensed Adobe CS4 Production Premium suite.  I had not bother to license CS5 because I primarily use Photoshop, Media Encoder and sometimes Illustrator and AfterEffects.  Well since I am the IT administrator, I called Adobe since I did not know how to fix this.  After navigating their menu system on the phone, I waited a while to talk to a live body about this major problem.  I use Photoshop a lot and have been using it since version 1.0.  I  just wanted to get some work done.

The person came on the phone.  She asked for my name and my contact telephone number.  I explained my problem to her.  In talking to her I realized that the Adobe license is tied to the OS and because I had reloaded the OS the license stopped working.  So anytime you crash and reload this will happen.  Fortunately I have not crashed before where the computer would not boot so this was a new one.  She had me download the Relicensing Tool.  It is a folder with two apps in it.  I tried to launch it and it crashed.  I tried again and it crashed.  We then went into the Terminal to try to launch it from there.  It did not work.  My phone connection to her got dropped.  I waited for her to call me back.  NaDa.

Thursday, I decided to try again with Adobe as I did have work to do.  After the wait, we went through the same procedures with the same results as the day before.  Then the technician suggest to me that I should Uninstalled the suite of software and Reinstall it from the my original download.  That should relicense it.  Because I had already installed the suite on two computers,  I could not install it on a third.  Well my computer was the second and the suite would think that it is a third. The Adobe tech reset the serial number to accept a third install and she gave me a case number if that did not work to conclude our call.  After doing the long install I decided to try to launch Photoshop.  I got the same licensing dialog box as before.  NaDa.  Being late in the day with other things to do I waited till the next day to call back.

Friday was going to be an expensive day.  First thing in the morning I called Adobe again.  After waiting on the phone to talk to a live person I finely got through.  He had me try the Relicense Tool again but this time he wanted me to boot the other app.  It could not boot because it was a Power PC app which don't work on Lion.  The man asked me what OS I was using.  10.7.4  He said for me to wait and he would get back to me.  After the wait, he told me that I could not license CS4 with Lion 10.7.4.  I would have to upgrade to Abobe Production Premium CS6.  I asks how much would that cost.  $900+.

Is there really an alternative to Photoshop and Adobe's crazy licensing scheme?  I my search while deciding what to do, I did not really find any.  I decided for the upgrade because I would be compatible with the outside world, the others that I work with.  They win.  Now I have to complete suite.  It includes Premiere, so I will be trying out the latest version.  After downloading and installing it, Photoshop did open normally and I could work again.