The GH3 does Kickstarter – Update: Funded! 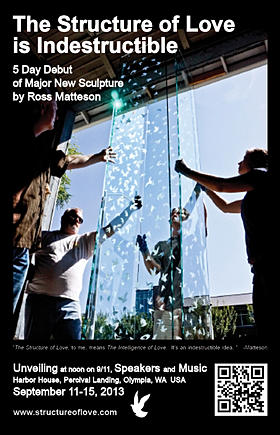 I was approached by a long time friend and brilliant artist to help with his Kickstarter campaign.  Ross Matteson has created a sculpture dedicated to 9/11/2001.  He asked me to create a video for the project to be used on the Kickstarter page.  I worked very closely with him to tell a story that he wanted to tell.

My interview with him was shot in his studio with my Lumix GH3 and the Lumix G X 35-100mm f2.8 lens.  I used my F&V R-300 LED Ringlights for the lighting with umbrellas.  I shot the interview with the 72 All-I .mov setting at 29.7 fps in the camera.  I have found this setting to be the best and Final Cut Pro X loves it.  The slow motion I shot at 60 fps and slowed it down.  Post was done in FCPX.

Here is more information from Ross on this project:

In October of 2001, only one month after September 11th, I made a glass and steel sculpture titled, The Structure of Love Is Indestructible.  It was covered with hundreds of flying doves etched into the surface of a glass tower. My motive was to honor the people of 90 different countries whose lives were lost or affected by the devastation of that day.

The intent of my design was to overwhelm and displace the horrific and hypnotic images constantly being replayed over and over with something else, with the truth about each person— independent of that tragedy.  I didn’t want to give in to an obsessive portrayal of evil as dominant or inevitable.   Instead, I wanted to celebrate and be awestruck by 3,000 unique individuals in the fullness of their potential and life.  My love for what was good and true about each of those people transcended nationality, race, religion, injury and ultimately, even death.
With a remarkable team of collaborators, I am currently making The Structure of Love Is Indestructible into a 10 foot high monument.   Though it is based on my original sculpture, its message is growing to embrace anyone who has been given the label of “victim”.    This piece will have two glass towers and have an ascending, instead of scattering, pattern of doves in flight.

My team is working to build a community of support around The Structure of Love Is Indestructible and its 5 day debut in Olympia, WA, at the Harbor House on Percival Landing.  The Washington State Council of Fire Fighters is part of this community of support and has endorsed the event in a meaningful way.  The Olympia debut will include inspirational speakers and music, and be free to the public.

We are also soliciting community funding for both this debut and the sculpture itself, through a campaign that we have just launched, described in the link below:

I encourage you to view the video on the above web page.    You will hear from Bruce Salvog, who was in the World Trade Center on 9/11 and from Alice Musabende, who survived the Rwandan genocide.  Their stories about working to transcend victimhood are inspiring.  They also express their direct support for this project.

Other information about The Structure of Love Is Indestructible and the currently scheduled debut events in both Olympia, WA (opening 9/11/13) and Tulsa, OK (opening 4/18/14) are included via this web site.