As many of you know, I now own the Panasonic GH3. But it did not start out the way I had planned.

In early December Kenmore Camera called me and said that the camera was available, so I ordered it and it arrived on my doorstep the next day. They told me they had six cameras and I was getting the last one. I didn't have a chance to look at the camera as we had company at our house that afternoon. That evening when I finally looked at the camera the electronic viewfinder (EVF) looked very odd. The image was very jaggy, very strange looking, it looked a lot worse than my GH2 electronic viewfinder.

So I wrote a post on the DPreview Micro 4/3 forum about my viewfinder. This is what I posted: “I just got my GH3 and the OLED viewfinder has a really jaggy image. The back OLED looks fine. Gets better when I pan. When it comes into focus, the OLED looks like an old color viewfinder from one on my early digital video cameras. Real bitty and jaggy. This quite a step backwards from my GH2. Anyone else seeing this problem? I saw GH3 at a trade show a few weeks back and it seemed fine.”

A few days later I got an email from a representative from Panasonic about the forum post.

“We have not received any other reports about this, so I'm very interested / concerned.

Are you, by chance looking at a photo with grid like horizontal / vertical lines such as roof shingles?

Any way you can photograph the image?

My response was:
“The camera does exhibit this problem, not the pictures. I am not looking at something that would cause moire. The problems is most pronounced on wide angle shots. The sample camera I saw at the Kenmore Digital Expo did not exhibit this problem. I would have noticed it. The jaggies that I am seeing are in the display itself. It is like the fields are reversed, if you're watching NTSC video. This looks worse some of the EVF's on my early digital video cameras.

Kenmore Camera is going to call me when they get some more GH3s in. I will check mine against theirs. As I said, the sample GH3 I saw at the expo did not have this problem. This Camera looks worse than my GH2, both of them and my Olympus EM5. All their electronic viewfinders look okay and I am used to looking at an electronic viewfinder. That is one of the reasons I bought these cameras. The rear LCD looks OK as well, so I don't believe the problem lies in the camera viewfinder processing.

By the way the rest of the camera is behaving normally. The images are quite lovely. The video is outstanding. Once this viewfinder gets fixed I will be very happy with the camera.” 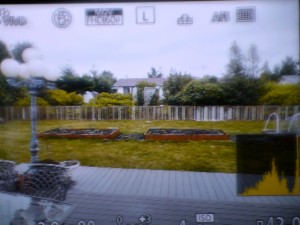 I then sent Bob a photograph I took of the GH3 viewfinder. A few days later he asked me for my contact information and said he would give me a call. He called me back and told me that Panasonic wanted my camera. In all the cameras that they had examined they had never seen a problem like this and wanted to examine my camera. I told him that Kenmore Camera was not expecting to get any more GH3's until the end of the December so he said he would try to expedite a camera to Kenmore so I could do an exchange.

A few days later I visited Kenmore camera and showed them the problem they agreed with me that the viewfinder did not look right. They said they'd be on the lookout for the camera that Panasonic was sending me and give me a call when it arrived. The Friday before Christmas, the new camera arrived at Kenmore and I went over and picked it up. I first checked the viewfinder, it was a lot better. Kenmore Camera took my old camera and shipped it back to Panasonic.

I must say I am grateful to Panasonic and Kenmore Camera for the help in resolving my problem.  I am also very happy with my new GH3.

3 Responses to Panasonic Is Listening