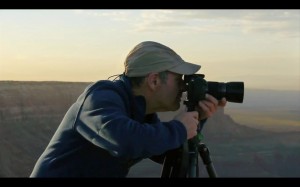 The new GH3 is almost a revolutionary camera, if it was not for the GH2. The GH2 was the first hybrid camera. A camera that was designed for both stills and video equally. The GH2 set new standards for stills and video in one box. It does not compromise at a price that won't break the bank. The Canon still cameras are compromised for video. The Nikon still cameras are compromised for video. The new Sony A99 looks very good but it is in a much more expensive and larger camera. The sensor is a full 35mm so it does not match the aesthetics 35mm motion pictures. We will have to see how it performs. Both the Sony NEX cameras and  Olympus OM-D have some problems as well.

This article is based on what I have read online after the introduction by Panasonic of the GH3 at Photokina. The GH3 adds features that all photographers will like. To begin with it has weather sealed robust construction with magnesium as the choice of body material. There is a new 16.05-megapixel digital Live MOS sensor with reportedly better low noise performance and dynamic range. As rumored, a new Venus engine is being used with four cpu's for improved performance. Panasonic has added an electronic shutter function on the front and rear curtains for vibration-free operation. A big benefit for low shutter speeds. The battery has been enlarged for longer operation.

Another nice new feature is WiFi. Panasonic will be releasing both IOS and Android apps for control, viewing and downloading. I miss the USB control on my old Canon 60D.

But as many have said, the video portion of the camera is where the GH3 shines and Panasonic has addressed the needs of the videographer very well. The GH3 ads much higher bit rates (up to 80mbs ALL-I) than its AVCHD brethren. It has higher frame rates, audio monitoring and control all in a weather sealed body unlike the GH2. This has the benefit of recording every frame like the Canon 5D Mark III, costing $3000 and with better sharpness too. The 5D has less than 720p resolution because of its line dropping. The video picture quality of the GH2 is as good as cameras costing 10 times as much with none of the typical HDSLR problems of moiré and false color and lack of resolution. The camera has a newly designed low-pass filter so sharpness should not be an issue like the Canon's. If Panasonic keeps the good sharpness, they will have a winner. 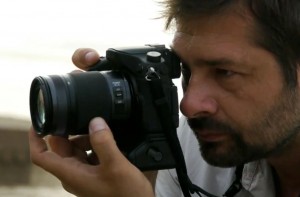 The GH3 catches up with other cameras that offer 1080 60p recording at a maximum bit rate of 50Mbps. Canon does not ofter this in any of their cameras including the expensive C (Cinema) series. This higher frame rate will help those who like slow motion or those who want less judder in movement. Some like 720 60p for its clear motion and this new camera will give this at a higher resolution. I have read that Panasonic has kept the telephoto crop mode of the GH2 but we will have to wait to see.

Besides AVCHD, Panasonic now offers MOV and MP4 format for recoding video. The 80Mbps ALL-I format is only available in the MOV wrapped which is a lot easier to work with AVCHD and its file structure. With ALL-I format records every frame so there is no motion interpolation between frames. Offering All-I encoding means the GH3 has caught up with the Hacked GH2. Also available is the IPB (interpolated) format which has had its nitrate increased from 24Mbps to 50Mbps, again like the GH2 Hack). The maximum bit rate for AVCHD is 28Mbps at 1080 60p. 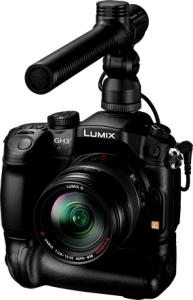 Another area the GH3 improves is audio with Linear PCM recording. Panasonic smartly added the standard audio jack 3.5mm we are used to on most cameras that don't feature XLR. They also added a 3.5mm headphone jack as well for audio monitoring. Reportedly there is also better control over the audio. I don't like double system audio and record in the camera.

Speaking of control there are 3 control dials. One wheel on the front next to the shutter button. One wheel in the back top right hand corner and a central control dial on the back around the four way controller.

By far the most controversial aspect of the GH3, is it's size. Panasonic has said they wanted to build a camera aimed at more serious users and they feel they had to make the camera bigger with more room for controls. The GH3 is the largest m43rds camera to date. It is about the same size of a Canon T4i which is a bit bigger than the GH2. A lot of people have flocked to the m43rds format because it is small. The GH2 is small, so small it does not fit my hands. My bottom finger does not know what to do. I did not mind the size of my 60D and the GH3 is smaller than it. I think it will fit my hands better. it is not much heavier either: 19.40 oz vs. 14 oz for the GH2. The 60D is 26.6 oz. When you include all the changes to the GH3, increased size and weight is not much to pay for.

This new camera only validates how good the GH2 is. I plan to keep my GH2 for a long time. If I want small and inconspicuous, I will grab the GH2. If I want more capable then I would have to choose. But actually the more important news out of PhotoKina was the launch of the Lumix G X 35-100 f/2.8 O.I.S. We will cover that at a later date when I have one.

By the way the GH2 is a great stills camera as well and the GH3 will be as well. I love seeing the exposure, focus, white balance and depth of field in the viewfinder. Also not having to take my eye away from the viewfinder to see playback is absolutely the best. Not even my excellent Olympus E-M5 does this.

Thank you Panasonic for listening.

3 Responses to The R-Evolutionary Camera