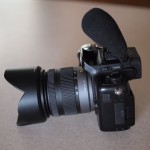 Most HDLR's have the mic on the body of the camera and most are monaural.  One of the really cool things about the GH2 is the built-in stereo mic.  I am really glad that Panasonic put the stereo microphone on the pop up flash of the GH2.  It is wonderful to have cool ambient sound with my videos.  I did the Irrigation Festival Parade with the built-in mic but no windscreen.  I just set the camera up near the parade announcers.  There was some wind noise and I started looking for a solution.  I now have a windscreen on my onboard microphone.

I was looking for something to put on the mic with the flash not popped up.  Just to cover the top of the camera.  Somewhere I had read that some one had popped the flash up to put a windscreen on it.  I put a foam windscreen from a small mic I had and it seemed to help but I wanted something better. 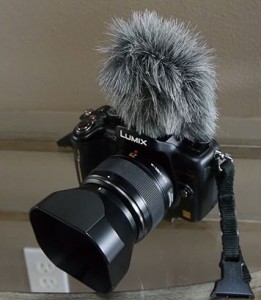 So now I was looking for the perfect windscreen.  There where some foam screens for small mic's and recorders with mic's.  I wanted something like a dead cat cover I had seen on shotgun mic's.   Or as some call them, “fuzzy bunnies.”  These screens have the best wind resistance.

In my search I found a company that sells all type of windscreens – Micover.com.  Then, I had decide which one would work best with the GH2.  I ordered a screen that is designed for the Panasonic HVX 200's on-board mic: Micover Slipover-Mini for Panasonic AG-HVX200A (On-Board) [MC-HVX-ONB] It cost about $20 and was sent out to me.

After some tests, I have to say the Micover HVX On-board Slipover Series works great.  We had a fair amount of wind where I live so I could test it right away.  I have done a demo video with and with out the windscreen.

One Response to GH2 – Wind Noise No More