THE HOBBIT Underwhelms At 48 Frames Per Second

Word had come down that from people who have seen an advance screening of “The Hobbit” shot by Peter Jackson at 48 frame a second is underwhelming.  Like duh!

I have not liked the new LCD Tvs that have the higher frame rates.  They make Avatar look like a Soap Opera.  Yuck!

I am not surprised by this post.  3D is a gimmick.  48 frames is a gimmick.  When I first heard about the Hobbit using 48fps, I was hoping it would be projected at 24 in some theatres so I could see it.  I will not watch it at 48fps.

The filmmakers excuse is that they need the 48fps for 3D.  What about motion blur.

I saw Doug Trumbull's ShowScan (which had a 60fps) and it looked like ‘Live Film'.  It was not good for dramatic motion pictures.  Neither is this.

I remember a time when we were all trying to make our 60fps video look like film.  The only way to do it was reduce the frame rate to 24p.  Those new cameras were the rage.  Even at 30p they looked better.  Now you have Peter Jackson going the other way because of a gimmick, 3D.  They is no replacing of good story telling.  And 24p does this.

This from Devin Faraci at CinemaCon [reading the full article here is highly recommended]:

“The 48fps footage I saw looked terrible. It looked completely non-cinematic. The sets looked like sets. I’ve been on sets of movies on the scale of The Hobbit, and sets don’t even look like sets when you’re on them live… but these looked like sets. The other comparison I kept coming to, as I was watching the footage, was that it all looked like behind the scenes video. The magical illusion of cinema is stripped away completely.

[The Hobbit] looked like a hi-def version of the 1970s I, Claudius. It is drenched in a TV-like – specifically 70s era BBC – video look. People on Twitter have asked if it has that soap opera look you get from badly calibrated TVs at Best Buy, and the answer is an emphatic YES.” 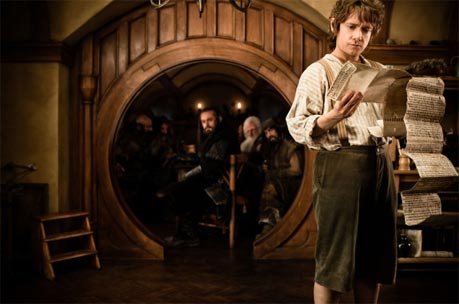 Jim Vejvoda wrote this at IGN.

“It looked like an old Doctor Who episode, or a videotaped BBC TV production. It was as shocking as when The Twilight Zone made the boneheaded decision to switch from film to tape one season, and where perfectly good stories were ruined by that aesthetic. Here, there were incredibly sharp, realistic images where colors seem more vivid and brighter than on film, but the darker scenes were especially murky (and the 3D only dims that image even more). Frankly, it was jarring to see Gandalf, Bilbo or the dwarves in action against CG-created characters or even to move quickly down a rocky passage. The whipping of a camera pan or the blur of movement was unsettling.”