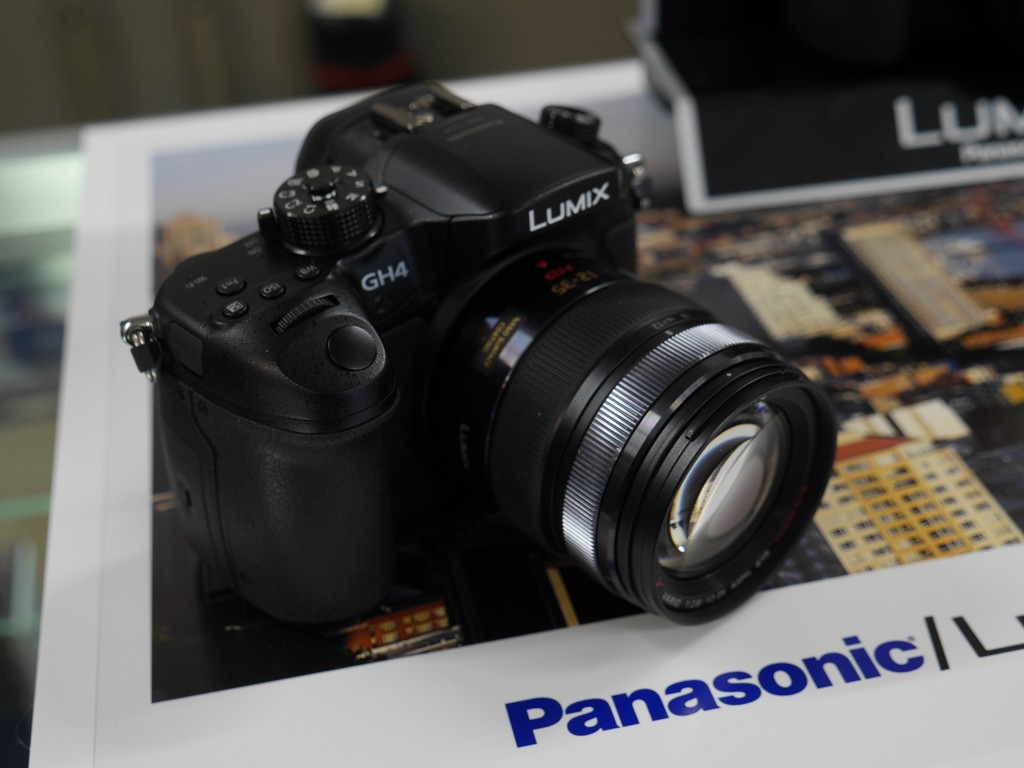 It is here! On Friday Feb. 20th, I posted on this site that I was going to the Kenmore Camera Grand Opening. I tweeted it and Kenmore camera reposted that tweet. They also sent me a note that a certain 4K camera would be at the show. It was.

My thoughts about the GH4 after handling and shooting with the preproduction camera:

The first thing you will notice is that the camera looks like a GH3. It uses the same battery as the GH3 and battery grip. But a GH3 it is not. So much has been improved on this new camera that it is a major step forward.

The next thing you notice when putting it up to your eye is that the viewfinder has been improved dramatically. The viewfinder image appears very large to the eye. with no color fringing on the edges. It has a much clearer view because of the increased screen resolution and better optics in viewfinder. The eye cup is much more comfortable then the one on the GH3. The screen refresh rate has been increased so it doesn't not look like the traditional electronic viewfinder. The viewfinder image is much clearer. The pixels are so small that you don’t see them. Also the auto focus is blazingly fast because of a faster refresh rate and new quad processor.

There is a locking Mode Dial but it does not lock in the traditional way. If you leave it up the dial freely turns, if you push it down it locks. I like this arrangement much better than the way other camera manufacture’s do it.

All the buttons and dials are in the same place as the earlier camera. So anyone familiar with that earlier camera will be familiar with this camera. The menu system is very similar and more extensive add new features. There are a lot more controls for video in the new menus. With all these improvements we can tell that Panasonic is listening to the photographers who are using their cameras. But the main reason I came to see this camera was its biggest new feature, 4K video. It has been said before and I will say it again, 4K changes every thing. Panasonic has put together the most affordable 4K camera on the market. It does not have raw video, but the video it does have is damn good. Four times the resolution of full HD video is an incredible feat to put on an SD card. Mind it you need very fast cards for this camera. On this preproduction model with good cards it could shoot about 10 seconds of video before it quit. What a very fast card rated at 95 Mbps it could shoot 4K video without stopping. The 4K at this camera creates is at 100 Mbps. I tried the 1080 video at 200 Mbps and again on this very fast card I was able to get just a few seconds worth before it quit. To take advantage of this new camera, new SD cards will needed. This is not a big surprise but a necessity. The only video mode that you can still use regular cards is the slower AVCHD mode. This is a saving grace for wedding photographers and others who shoot long programs. 24 Mbps is a lot easier to record.

People are asking what is the benefit for still photographers with this new video centric camera? One of the major ones that I have thought of is that mirrorless cameras have never been thought of as good cameras for sports and other action photography. Most of them use contrast detection of focus so the camera usually is not good for tracking action. My solution is to shoot short 4K video clips and then pull out a still image from the video, a frame grab. 4K video yields an eight megapixel still, good enough for a lot of uses. Unlike the still photographers that use DSLR’s who get maybe 10 frames a second, with 4K video you get 30 frames a second with no viewfinder black out. That is a lot more frames to choose from. Still photographers are already doing this with the RED camera but the GH4 is only a fraction of the cost of the RED camera. In fact the GH4 is a lot less expensive than those DSLR's that the sports photographers are using now.

Will I be adding this camera to my arsenal? You bet! Does it replace the GH3? No. It is now a higher tier camera then the GH3. It depends upon the shooter.

Here are the pictures I shot with and of the GH4 at Kenmore Camera at Flickr.

Here is my video recorded on February 21 at the Kenmore Camera Grand Opening.