If you own a SLR or DSLR camera this is something you have wanted. How may lens caps have you lost? The patent pending lens cap holder allows you to securely attach a camera's lens cap to your neck strap or camera bag. The holder is a simple part that has a circular recess which allows a lens cap to be attached with a friction fit, in the same fashion as attaching the cap to the lens. Just press the release mechanism already in your lens cap and engage or disengage with the lens cap holder. The holder includes a buckle for attachment to the camera's neck strap.﻿ The design does not require any modification to the camera or lens cap.

I just donated to this project. You should too. It is a cleaver idea. Please go to their website.
Camera Lens Cap Holder For our fourth interview we talked to Daniel McElderry of CamCaddie at the Schneider Optics booth. More information @ http://camcaddie.com

(I used a CamCaddie EX during the show on my Canon 60D HDSLR camera.)

For our third video we went to the Manfrotto booth and talked with Robert Stephani. More information can be found @ http://manfrotto.us

Robert Rozak from JuicedLink is our second interview at NAB 2011. More @ JuicedLink.com

Our first interview at NAB was Rod Gammons of Rotolight.

Everyone likes a good novelty flash drive, as long as it’s the right kind of novelty. Photographers will enjoy these little 35mm film canisters converted into 2GB and 4GB drives — at $19 and $24 they’re not too expensive, and there’s a choice of many different film types, so you can pick one he or she might have actually used.

LinkyFocus is a new USB follow focus under development. I did not see this at NAB. I did see a lot of motorized follow focuses. I always thought, why not use the focus motor in the lens? Looks promising.

From their site:
“The LinkyFocus uses the autofocus motor in Canon lenses to control focus, even while recording video. LinkyFocus is different: driven by an electronic position encoder, it allows to make fine adjustments of focus while rotating slowly the knob, or rotating faster automatically switch on the fly to the other two available speeds. This compact system works in any LiveView modes, which can be useful for film making. On the unit are available up to 10 push buttons to start/stop the recording and for other features. Can be used as remote control for a camera mounted on a crane or jib, can work with normal USB extension cables up to 25 meters in length.” I am finally home after three exciting days of NAB. Over the next weeks I will share quite a few video interviews with some of the booths that I visited. Here I am at the Hoodman Booth. For those I met at the show, It was wonderful to meet you and I hope you enjoy the blog about our experiences.

I am holding the rig I used to interview people at their booths. (My rig consisted of a 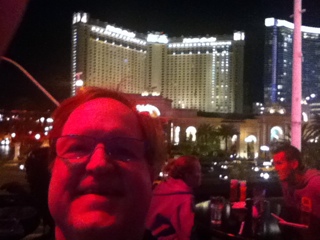 The first day of NAB was good. Saw great stuff. Nice friends. Look to future blogs for blogs about what I saw.