I have not liked a camera so much since my Nikon F3 film camera.  My Nikon F3s were used for almost 20 years.  This is a lifetime in digital.  When I put the beloved F3s and all it's lenses on eBay I moved to digital.   I have used quite a few digital cameras since 2001.  Spending over a $100 a month on film and processing I was willing to change.  Another reason I started doing digital photography was because, I had been manipulating images in the computer for sometime with Photoshop and other programs and I was scanning film and prints.  Shooting digital would eliminate that step.  I had been using my video camera to shoot digitally with since 1995 so I was happy to start shooting stills with a digital still camera.  I waited till the cost of digital cameras came down to about $1000.  I think I found a digital version of my Nikon.

The first digital camera was the Sony F-707.  It was wonderful to be able to look at the images right away on the back LCD. Being a professional video user, I use to an electronic viewfinder on the camera.  At five megapixels, the first digital cameras were pretty low in resolution. The shot had to be shot right and you could not blow them up that big. The camera had a lens that was a fixed zoom. 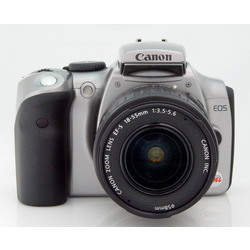 Then Canon startled the world with the 6 megapixel Canon Digital Rebel. Unlike my F-707, the Rebel was a DSLR which meant interchangeable lenses and an optical viewfinder.  I bought some of the consumer lenses for it and they were at best, so so.  Not great.  Nothing like the Nikkors for my F3.  I could not afford the L-Glass from Canon because most of my money went into buying video cameras as they were my main money maker.  The images were good but the color was a little off for my taste.  I was a Kodachrome guy and it was more like Fuji.  And the auto focus was not very fast.  Some of my old manual lenses were adapted for it as well.

Going on vacation I needed a second camera for my wife, so I bought an Olympus E300 on a special deal.  Being the new Four Thirds sensor format camera, the E-300 had a smaller sensor than the Rebel. Not that much.  The thing I liked about it right away is that it had a Kodak 8 megapixel sensor with Kodak color and the jpegs out of the camera were excellent.  Olympus is known for that.  The images were very good but the camera noise was much higher than the Rebel.  Olympus cameras were at the time not too fast in auto focusing.  What I loved about the Olympus cameras was that even the consumer level lenses were very sharp and well made.

So next I wanted a more professional camera so I bought the Olympus E-1.  It had a beautiful image at 5 megapixels and the pixel sharpness was better than my previous cameras.  I really liked it for the rugged construction and how quiet the camera shutter was.  The sound of most digital cameras are quite noisy and the press photographers use them like machine guns.  Not very discrete.  The camera was smaller than the other DLSR's at the time.  Lighter too.  I was very happy to loose the weight.  The LCD was small and fixed but worked well.  Also I added some Pro level for lenses to my kit.

The Olympus E-1 was upgraded to the E-3 which had 10 megapixels. This  was even better and I loved the colors and richness of the image.  It was weather sealed like the E-1.  It was one of the first cameras to have a live view function.  It also introduced the back swiveling LCD like a video camera.  It was really nice being able to adjust the angle for low angle pictures just like I done with my Nikon F3 by taking the viewfinder off.  I could close the LCD to protect it. The camera spoiled me.  I was glad that Olympus improved the autofocus in the E-3 to such an extent that it competed with Nikon and Canon.

Then I bought my second Canon camera, the Canon 7D. For the first time I had a still camera that had 1080p video from a large 18 megapixel sensor.  I also this time bought the expensive L-Glass as this was going to be my video camera as well.  I first bought the EFS 17-55 F.28 IS lens but sent it back and bought the Canon L 24-105 F4 IS lens. I did because of the image stabilization and I wanted the longer focal length for video interviews. My clients wanted the low depth of field that the large 35mm sized sensor gives.  The lenses really focused fast.  Faster than any other camera I had owned.  The 7D did have some minor and major problems. There is the 12 minute record limit.  The audio had to be spoofed with a pilot tone into being usable as the camera had only a bad AGC circuit and it could not be monitored.  I bought a JuicedLink DT454 audio mixer to help.  Even bigger was the problem that the sensor would overheat and shut the camera down.  It did this on a professional shoot and it was not good.  I was also unhappy with the moire and aliasing at the sensor had.  At 1080P resolution was not that great.  Canon uses line skipping to create their video in their DSLRs.  Another major problem was the rear LCD was the viewfinder as the optical viewfinder was black because the reflex mirror was up to shoot video.  The camera had to be adapted to be used as a handheld camera which required a third party viewfinder which inturn required a camera rig.

I did not like that the 7D did not have a swivel LCD.  I missed it, so when the Canon 60D came out, I bought one.  The 60D was improved in another way as well in that it also offered manual audio level control for more control, but no meters.  It was not as nice as the 7D as it was not weather sealed and made of plastic composite.  I was happy with the 60D.

Thru reading the internet I had heard that Panasonic GH2 had better video then the Canons, so I investigated it. The GH2 also had the swivel LCD screen which I loved.  I was impressed, so I purchased one.  After using to GH2, I could not use by Canons anymore.  Besides swivel screen, the other thing I liked about the camera was being able to see the audio level in viewfinder and on the LCD.  I was happy that I had a camera that can be used for both stills and video.  Panasonic and Olympus introduced some very nice lenses for these cameras.  It was great to have a smaller, lighter camera again.  It was not weather sealed and I could not monitor audio.  I was very happy with the GH2 and bought a second one. 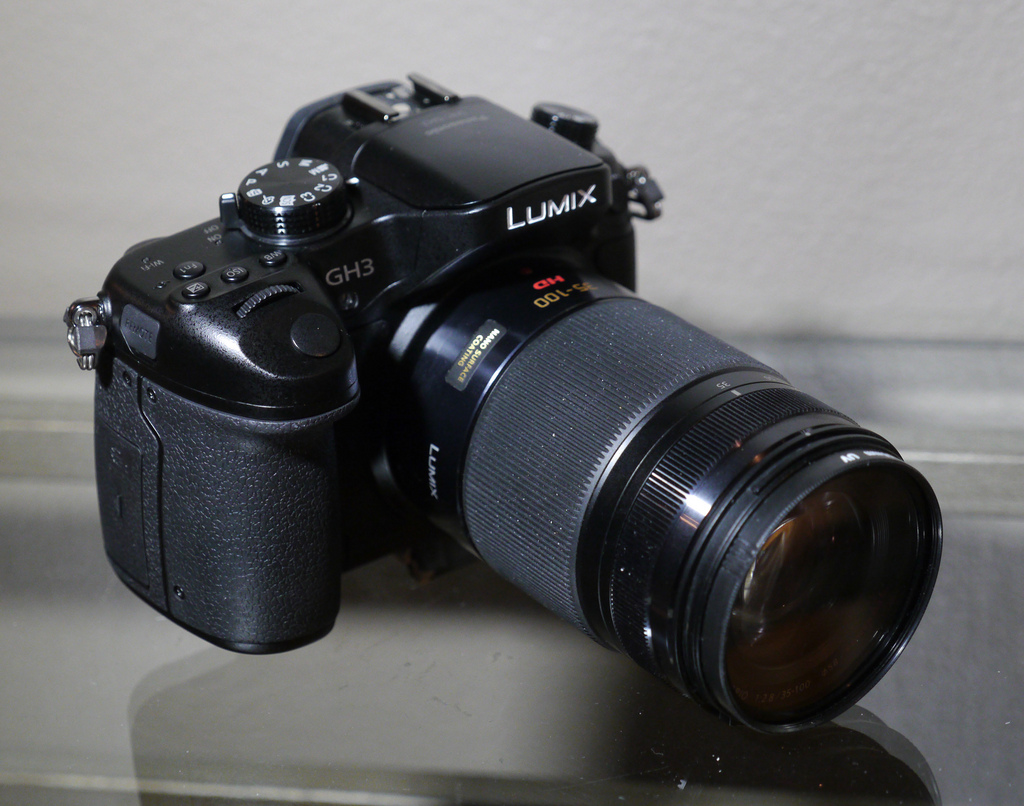 All these cameras over the past 10 years I have used.  I thought that I could do better and was always looking for something that would meet my needs.  I believe I found The Camera.  When Panasonic announced GH3, I was hoping that it would be a better camera.  It is a Better Camera.  The camera possesses many of the good qualitys of those other cameras but now these features are all together in this camera.  Also the new X lenses from Panasonic (the G X 12-35 F2.8 O.I.S. and the G X 35-200 F2.8 O.I.S.) complete the picture.  I now have a relatively small, light weight, magnesium, weather sealed, fast focusing, swivel LCD, electronic viewfinder, audio monitoring, high dynamic range, high quality, low picture noise, hybrid camera with great lenses.  I think I found a digital version of my Nikon F3 in the Panasonic GH3.