The LA Times featured an article 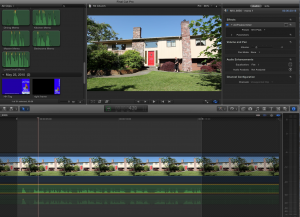 about how Apple is starting to win back video editors.  They don't need to for me as FCPX has become my editor of choice.

“The backlash over Apple's redesign of Final Cut Pro video editing software two years ago was so severe that even slashing the price by $700, to $299, caused an uproar.”

Doddleme also has an article.  “Here at doddle, both the co-founder Jim Robertson and I are big fans of Final Cut Pro X, and I often post video tutorials from both Ripple Trainingand Larry Jordan. We feel that FCP X is the fastest, most powerful and modern NLE out there. Two years after their big announcement at NAB 2011, and the release that summer, Apple is ready to win back pro editors, and they’ve released the 8th update to the software that found itself at the center of controversy.”

I commented:  I use FCPX professionally and love it. It took a while to grow on me. I look forward to when I use it. It is the best editor on the market right now at least for me. I have to whole Adobe Production Suite and I still use FCPX. It is the fastest editor. Apple has challenged the editing community to rethink the non-linar editor. FCPX feels more like film editing than video editing.”

Apple has released an new update to Final Cut Pro X.  The new update brings FCP X to 10.0.8, and features include:
▪ Support for Sony XAVC codec up to 4K resolution
▪ Option to display ProRes Log C files from ARRI ALEXA cameras with standard Rec. 709 color and contrast levels
▪ Resolves an issue where some third-party effects generated green frames during render
▪ Resolves performance issues that could occur with certain titles and effects
▪ Time reversed clips render in the background
▪ Ability to use key commands to adjust Clip Appearance settings in the timeline
▪ Ability to view reel number metadata located in the timecode track of video files
▪ Mono audio files in a surround project export with correct volume levels
▪ Drop zones no longer reset to the first frame of video after application restart
▪ Fixes a performance issue which resulted from selecting multiple ranges on a single clip
▪ Fixes an issue where the Play Around function did not work properly on certain clips when viewed through external video devices